Musician of the Year Award

MUSICIAN OF THE YEAR (MOY) PROCESS:

The West Michigan Jazz Society invites its membership and the general public to send in their nominations for the 2023 WMJS Musician of the Year Award. Click here for the online form.

In the year 2000, the West Michigan Jazz Society began honoring our outstanding local musicians beginning in the year 2000, by electing a "Musician of the Year." Our award honorees thus far include:

W.M.J.S has a new annual award! 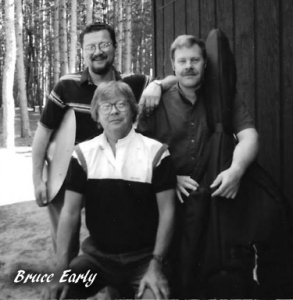 This award will be given in Bruce Early's name to the Jazz Educator of the year by the W.M.J.S. Dr. Bruce Early (1939-1998) was the area's premier educator, band leader, performer, adjudicator, and contractor in the Grand Rapids area as well as the Mid-west. He taught at Aquinas College and organized an annual jazz festival and summer jazz ca
mp besides being a conductor at Blue Lake Fine Arts Camp. He nurtured young talent and gave them an environment to gain experience to perfect their craft. So this award will continue his legacy as well as give acknowledgment and thanks to each recipient.

Each recipient will not only be selected by their teaching talent but by their support and caring of the direction that our young jazz musician's paths may take. West Michigan has many devoted and talented educators and this will be a way thanking and acknowledgment for their expertise. 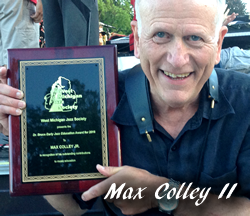 June 2016- The first award was presented to Max Colley II. His dedication, drive, enthusiasm, as well as Northview High School's unparalleled competition record at jazz festivals, has been an inspiration to all who are involved in jazz education and have been jazz enthusiasts for years! Max inspired not only his students but everyone around him. He welcomed other teachers
to share their knowledge which in turn gave his students unlimited knowledge and experiences to learn from. Max has retired from teaching but keeps in touch with many of his "kids"throughout the country. He is still sharing his enthusiasm and caring for other people’s lives and accomplishments. 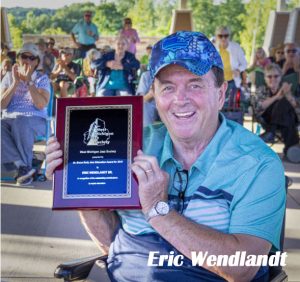 August 2019 -The Bruce Early Award was presented to Eric Wendlandt, an extremely talented musician with extraordinary showmanship. Eric was band director for West Catholic High School for 25 years, 1965-1900 where his teaching skills provided an extra special experience for any band student who wanted to excel. The marching band went from the marching 100 to the marching 200 at the pinnacle of his time in the late 70s and early 80s. Under his direction, West Catholic became a force in both symphonic and marching bands, achieving many awards and number one ratings through the years. “I’ve always had a passion for education in music”, Eric stated. “Music is perhaps one of the few things left in this world that makes everyone happy, no matter the country. It’s truly the universal language”